What can we learn from Sponge Bob or Nemo?

One of the most important aims of the ProChil project is the exchange of know-how and getting inspiration from each other regarding the Early Childcare. That is why the project meetings are always connected to study visits in kindergartens/nurseries. It was the case also for the Sevilla transnational meeting which took place in October 2018.

During our stay we visited 3 nurseries run by Asisttel – the Bob Esponja (Sponge Bob) nursery, the Nemo nursery and the Torre Triana nursery. 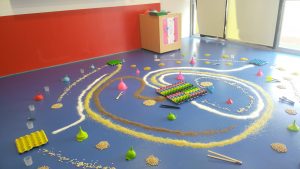 After the partners arrived in Seville, the first place to go was the Bob Esponja Nursery in Avenida República Espaňola, Seville. In the nursery we were welcomed by Mrs. Emilia Gómez, the head of the Asisttel Childhood Area, who explained about Asisttel, about the Spanish preschool care system and about the nursery as such.

Asisttel runs in total 14 preschool care centres/nurseries with over 800 children. In total the organisation has circa 100 employees.

The Bob Esponja nursery is quite big – it has 6 classrooms with in totak 95 places. As there is big competitions between nurseries in the area, in the time of our visit there were only 45 children attending the nursery. The classes for small children have less places than classes for bigger children. In general the school acceptes children from 3 months to 3 years.  In the class for the smallest children there are 5 children attended by 1 teacher, there are 9 children and 1 teacher in the class for the 2 years old children and there are 15 children in the classes for 3 years old children. In each class there is also one person as help.

The school is open from 7:30 to 17:00. It is member of the national network of emotionally prepared schools. The teachers work with the children based on annual projects. 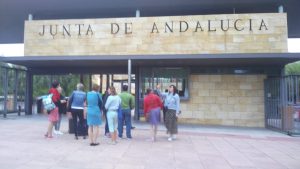 The nursery has 5 classes for in total 45 children. There are 6 teachers and 3 nurses.

The teacher also work based on projects while this year’s project was Fernão de Magalhães and the journey around the world (which started in Seville in 1519). The children work around travelling, traditions and foreign cultures. 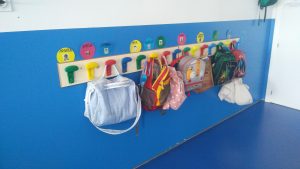 Nemo nursery is the third nursery we visited and it is located in Tomares. It has 5 classes for 74 children and Asisttel runs it for the municipality of Tomares. There are maximum 20 children in one group where there is one teacher. There are 2 help people working in the nursery which attend classes where there are most needed.

The project in this nursery was “castle” as you can see in the pictures below.