The Flemish city of Antwerp was the place for the first joint staff training event of preschool teachers and other early childcare professionals representing the partner organisations of the ProChil project. Karl de Grotte University College was a perfect host and one of its campuses was used by the project for holding meetings and workshops. 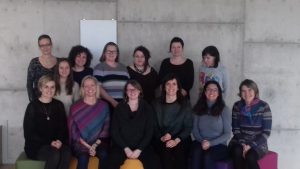 The teams from Sweden, Spain, the Czech Republic, UK, Greece and Belgium participated in discussions and workshops which started on Monday the 5th of March and ended on Friday the 9th of March. In the KDG campus, the teams shared their experience in early childcare and education in order to contribute to the planned output of the project – the curriculum for the qualification of a nurse. 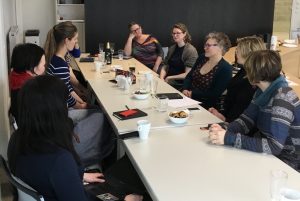 On the first day the ProChil team was welcomed by Dietlinde Wollockx, the head of the centre of expertise Pedagogical support in day care who introduced the research programme they are currently working on and their other projects. Among others, Karel de Grote University College is currently involved in the PACE project, an Interreg 2 Seas project under the Specific Objective “Social innovation”. The aim of the project is to help unemployed parents into work by improving access to childcare. Other KdG projects include the GoGreen project in cooperation with Reggio Emilia or Children’s zone project financed under the Asylum, Migration and Integration Fund.

Starting from Tuesday workshops on differecnt topics were held by the project teams. On Monday Montessori Kladno introduced the topic of “Teaching children the hygiene habits” from the Montessori point of view, on Wednesday the Asistel team presented the topic “Applying the principles of healthy lifestyles in early childcare” and MBM TDC presented the topic of “Methods and forms of pedagogical work in early childcare“. On Thursday Brudhammar forskola lead the workshop on “Addressing pedagogically and psychologically unfavorable educational situations” and Elida Kalpogiani from Playing led an interactive workshop on “Applying knowledge about the child’s development to praxis“. 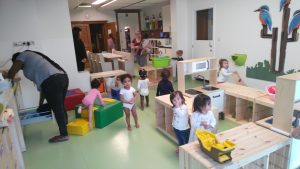 As a part of the programme the ProChil team visited two facilities for early childcare. In the ECEC Rainbows the team had an opportunity to discuss practical issues with the director, including the principles of working with toddlers and infants. After that the ProChil team visited four departments divided by the age of children, and other rooms including dormitories or kitchen. The ProChil team could watched children, caretakers and the environment of the ECEC. The second facility we were able to see was the ECEC GZA Kinderopvang. The team went through four departments, and also looked into the food preparation. You can read more information about the facilities in the article here.

Visiting these facilities has been a stimulus for discussion. During the Friday’s wrap up the ProChil team agreed on the dates of the next meeting which will be in Sevilla, then next tasks were divided.