Integration of children with another mother tongue: The Swedish way

The most important idea of the ProChil project is learning from each other, listening to each other, getting inspiration from abroad. As the systems of Early Childhood Education and Care varies in different EU countries, there are different methods, different ways to deal with problems. In the project each of the partners deals with a specific topic. In March, during our stay in Antwerpen we had the possibility to discuss these topics. Johanna and Sofie from Brudhammars Förskola, our  Swedish partners, held a workshop about addressing special educational situations.

In a short series of article we will bring you information on the following topics:

Integration of children with another mother tongue

In order to integrate the children with another mother tongue in preschool, it is crucial that the guardians understand the importance of preschool for children. In Brudhammar Förskola the team always start up with a meeting with the guardians to describe how the preschool works and what rules apply. An interpreter is present during these mettings.

Often, there is a discussion about what food the children should have. At preschool, the children can have special food due to allergies, religion or other special reasons such as vegetarian diet. Other things that may be discussed are what times the children are entitled to attend preschool. Our rules state that the children have the right to stay in preschool while their parents work or study. If the parents are jobseekers, the child has the right to 15 hours, but can be extended to 20 hours for the child to learn the language easier.

Another thing that often is discussed is the childrens sleeping situation, the guardins have questions about the children sleeping outdoors during all seasons, which is a common thing in Sweden.

After the guardian-teacher-meeting, the guardians participate in introduction at preschool. The first week, guardians are present every day between 9-14 and the second week the child is by itself, but guardians can be reached on the phone and come if needed. These weeks are important for both the child and the guardians. They get to know the teachers and the guardians get an insight into how the preschool works and what we do in a day.

During introduction, the teachers try to learn simple words or phrases in the child’s language so that they can understand what the child wants. From the experience we know that the language comes naturally to these smallest children. The children learn Swedish quickly because they have a need to make themselves understood among friends. Younger children can mix the languages ​​from the beginning but it does not take long for them to sort the different languages. The regular routines we have at preschool help the children understand. Also, they imitate other children and learn the words around different situations. For the teachers it is important that the child becomes one in the group and thus integrates into the Swedish culture.

Playing is incredibly important for children at an early age and playing is universal. Playing builds bridges between the children and creates an opportunity for conversation. While playing language is important which makes children quickly learn the language when they want to play. 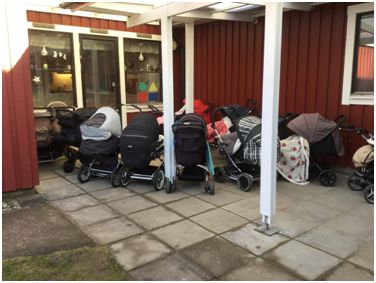 Cookie Consent
To provide the best experiences, we use technologies like cookies to store and/or access device information. Consenting to these technologies will allow us to process data such as browsing behavior or unique IDs on this site. Not consenting or withdrawing consent, may adversely affect certain features and functions.
Manage options Manage third parties Manage vendors Read more about these purposes
View preferences
{title} {title} {title}