The next country we would like to present after Greece and Flanders is Sweden.

Sweden belongs to a dual-earner model, which is characterised by policies that support the equal sharing of work and child care. Dual-earner countries are often characterised by extensive goals to integrate women into the labour market and to provide comprehensive support systems for working fathers and mothers. Thus, policies and laws support women’s labour market participation. Consequently, women’s labour market participation is high and family policies are generous, with state-supported child care and parental leave for both parents. Sweden has been considered a role model in developing family-friendly policies. In the early 1970s, leftist parties in the Nordic countries began initiating policies to increase women’s participation in the labour market; these policies included day care for children under school age and parental leave insurance granting parents paid leave to care for infants.

There is even a positive employment impact of parenthood on women – the biggest in Europe.

It’s a well-known fact that Sweden has one of the highest number of parental leaves in the world, where parents are entitled to 480 days of paid leaves when a child is born or adopted. This number is super high by international standards (see the infographic below) and is perhaps Sweden’s most famous argument when it comes to being a child-friendly system. Each parent has an exclusive right to 90 of those days which makes Swedish fathers more involved in care.

For 390 of the days, parents are entitled to nearly 80 per cent of their normal pay. Benefits are calculated on a maximum monthly income of SEK 37,083, as of 2015. The remaining 90 days are paid at a flat rate. Those who are not in employment are also entitled to paid parental leave.

Parental leave can be taken up until a child turns eight. The leave entitlement applies to each child (except in the case of multiple births), so parents can accumulate leave from several children.  Outside the 480 paid days, parents in Sweden also have the legal right to reduce their normal working hours by up to 25 per cent until the child turns eight. Do keep in mind, however, that you get paid only for the time you work. 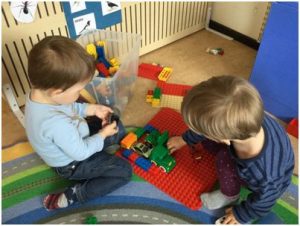 In Sweden the parents have the right to leave their children at preschool from the year the child turns one year of age until the year it turns six. The children begin school in autumn the year they turn six when the compulsory school attendance begins. 83% of all children are enrolled in the preschool, that is about 480 000 children.

In Sweden there are both municipal and private preschools. All preschools charge the same fee and follow the same curriculum.

Each preschool have children from one to six years of age. In what way they are divided into different departments is up to the head of the preschool. They can choose to have younger and older departments where the children are divided according to age or they can have all ages at the same department. In Sweden the average number of children in a group was in 2016 15.9 children but it varies depending on where you live. In the major cities there are often more children in a group while there are less in smaller places. The staff density was in 2016 5.2 children per staff. This means that there are three staff working in a group of 15 – 16 children. If the preschool have younger and older departments there are often fewer children in the younger groups and more in the older ones but the same amount of staff.

The cost of childcare in Sweden is set by law, the highest rate is for the 1st child and the rate is smaller for the 2nd and 3rd child. Child number four is free of charge. The fee is also limited by the maximum rate compared to the gross income of the family.

Each preschool receives a subsidy for each child enrolled at the preschool. This also applies to the private preschools. The subsidyis being paid out by the municipality and is revised once a month. 9800 SEK/month is paid out for each 3-, 4- or 5-year-old. 11211 SEK/month for children who are one or two years old. This money should cover everything, the staff’s salaries, premises, meals, cleaning staff, kitchen staff, water and electricity, further training, movables, toys and the expense for children with special needs. 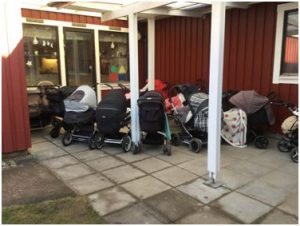 In Sweden there are two different trainings which qualify you to work at a preschool. The childminder training is three years at upper secondary school and one and half year at adult education. The training includes both theoretical and practical parts. The preschool teacher’s traning is 210 points placed at a university or high school. It includes 20 weeks of practice at a preschool

According to law child minders and preschool teacher aren’t obliged to further training but most employers provide futher training for all employees. The focus varies but often the municipalities have the possibility of applying for state grants. These grants are earmarked and must be used to improve the staff’s competence.