Is running of childcare services for children from three months of age an international crime or the most common practice necessary for better integration of mothers into the labor market? Where does the Czech Republic stand in international comparison? How can facilities for children under three years of age be arranged according to the Montessori pedagogical approach and what is the daily routine in those facilities? And what are the plans of the Czech Ministry of Social Affairs in the field of preschool care and reconciliation of family and working life?

These are just some of the themes of the international conference organized by Family and Job on the 7th of November 2017 as a part of the Moje dětská skupina network and the ProChil: Professional Childcare and Education in European Nurseries project.

After the welcome from the organizing NGO and from the European Funds Department of the Prague City Hall, who provided the event with its patronage, the international conference opened with an international discussion pannel. The panelists from Sweden, Spain, Greece, Belgium and Great Britain discussed the possibilities of involving parents to the labor market and various forms of pre-school care in their respective countries. 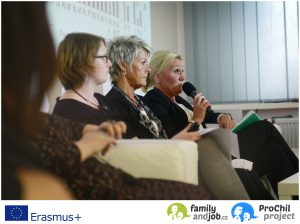 Nurseries for babies age 3 months or a 4year parental leave?

It turns out that the differences between European countries in the area of early childcare are surprisingly big. The Czech Republic has one of the longest parental leave periods in Europe and also the smallest percentual rate of children under the age of three placed in pre-school facilities. While there is a pasionate debate about placing two-year-old children to nurseries in the Czech Republic, in Belgium and Spain, for example, it is completely normal to have your 6 months old baby in a childcare facility.

“There is no public debate about this in Belgium. I think this is mainly due to the trust in the childcare facilities. Mothers have no doubt that their children will be perfectly cared for, the childcare facilities treat each child individually and there is qualified personell,” says Monique van Boom from Karel de Grote University College, Belgium. “Mothers can leave the work to breastfeed their child or they can leave their breast milk in the nursery. Every employer is obliged to have a room suitable for expressing the mothers’ milk with a breast pump,” she explains. The (weak) confidence in the state also plays a big role according to Bo Maria Daskalov from the British MBM Training Center. “Women from post-communist states of Central and Southern Europe do not trust much in state institutions, that is why they prefer to stay at home or entrust the children to their relatives, in Western Europe, on the contrary we believe in the quality of the provided care.”

Elida Kalpogianni from the Greek non-profit organization Playing agrees. “In Greece, women are often forced to return to work early for economic reasons. However, there are not enough facilities for children and mutual help of families or grandparents care are often needed.”

An interesting concept of paternity leave was mentioned by Anna Maderner from Sweden: “Swedish fathers are entitled to 90 days of paid paternity leave. It can not be transferred to a mother, so if her father decides not to use these days, the family looses the money.” There are minimum of such cases. “Fathers can use these days up to 12 years of the child. The use differs from family to family – some fathers use it when the child is sick, some to spend the summer holidays together, “explains Anna. 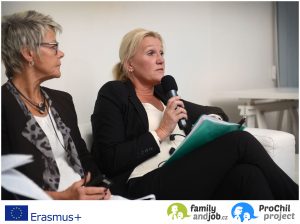 Childcare or early education? Montessori and the others…

At the end of the debate, participants of the conference were given the possibility to ask questions. One question was also about the topic of various educational programs that are applied in pre-school facilities and about the concept of unschooling. Elida Kapogianni used the possibility to introduce the goals of Playing in Greece. “When working with parents, we see that children aregetting under presure in terms of what they have to learn, in what activities they have to take part during the week etc. We are trying to persuade parents and teachers about the importance of free play for the sake of the play itself, we want to give our children more freedom to come and enjoy what they enjoy. ”

The international debate was followed by a presentation of Mgr. Dita Dlouha, Director of Montessori Czech Republic, with the topic “Get to know the world – insights into Montessori nursery”. Dita described the basic principles of the Montessori pedagogy and showed a video where Montessori principles and work with Montessori material were shown in praxis. “I see a great benefit in this approach to children, the approach is loving, gives clear boundaries, educates to freedom together with responsibility, teaches children to think and perceive themselves and the surrounding world with respect. Thanks to this approach even adults have the opportunity to remember the things that some of them have forgotten – to be present here and now, to do things that make sense, to enjoy the most common things together with their children, “says Mgr. Dlouhá and after her presentation we have to agree with her completely. 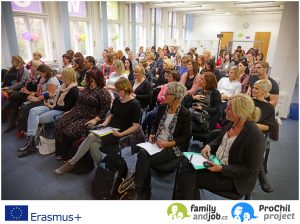 Family policy – what is the future for the Czech Republic

In the area of ​​preschool care, Sobotka’s government has been implementing several measures such as the introduction of children’s groups (Act No. 247/2014, on providing child care in the children’s group), pilot testing of a new childcare service within the micro-nurseries system project, inclusion of 2-years old to the kindergartens from 2020. As part of efforts to involve father in care, a weekly leave for fathers in the puerperium with a support of 70% of the daily assessment base is part of the family policy concept.

“Right now is the right time to publicly comment on the issue,” said former member of the Czech Parliament Zuzana Kailová in the follow-up discussion. According to her it is important to form a network such as Moje dětská skupina, but it is also important to turn to individual deputies individually and to inform them about the current situation. 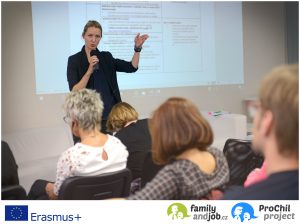 Trends and goals versus tenderness and love

The final presentation at the conference was a lecture by PhDr. Mark Herman, University Teacher and writer. “During the conference I heard of trends, goals and measures, but not a word about mom, gentle caresses or smell, where did they stay?” Herman asked at the beginning of his suggestive presentation. According to him children under the age of three have to stay with their mother.  If it is necessary for them to go to a nursery or other preschool facility, then at least it is necessary to follow the principle “for the first time I do everything with my mom”.

“The goal of our society should not be to give away three-month old infants in nurseries, but to promote part time jobs and home offices and develop community and maternity centers,” says Herman. His lecture gained a great deal of appreciation and the participants of the conference, including foreign guests, took part in the debate that followed. 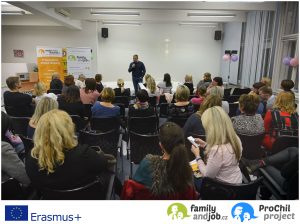 You can find photos from the conference on our Facebook page here.